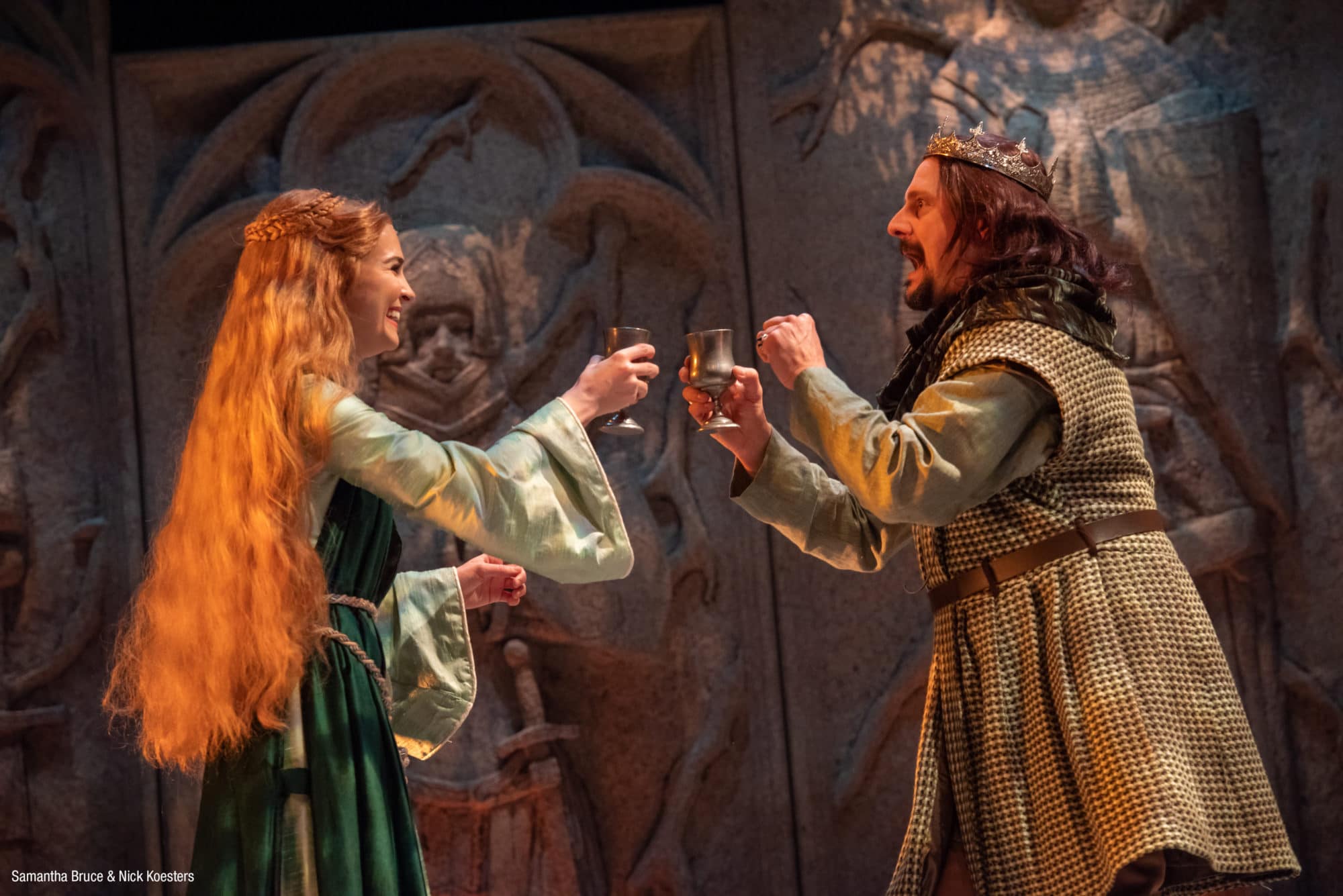 Camelot, in the immortal words of Monty Python, is a silly place.

Barter Theatre’s adaptation, with music and lyrics by Frederick Loewe and Alan Jay Lerner, leans into the silliness of the classic 1960s musical and earns big laughs thanks to a cast that swings for the fences. Richard Rose’s direction draws out the heightened world of King Arthur’s Camelot with a fairy-tale set, beautiful costumes and a winking assurance to the audience that we’re mostly here to have fun. But even with all the capering, there’s still a darker side to Camelot, and Barter also succeeds in bringing some genuine drama to the show, despite a jerky script that can’t always decide whether we’re supposed to laugh at Camelot or mourn for it.

The opening set strikes a somber, stately tone, the stage surrounded by what look like larger-than-life stone carvings of King Arthur’s Knights of the Round Table and assorted other characters from Camelot — the mythic seat of King Arthur’s court in medieval England. Those huge statues, lit by a kaleidoscope of stained-glass colors throughout the show, give us a sense of these characters as legendary figures. Arthur. Guenevere. Lancelot. Merlin. The stories have been told and retold so often that we’ve stopped thinking of them as quite human. They’ve become bigger than that.

Against that imposing backdrop, Camelot tries to bring back some flesh and blood back to the scene. The show quickly strips back the curtain and shows us a kingdom fraught not with blood and intrigue but with innocent frivolity (at least at first). In the first scene, Guenevere prays to St. Genevieve that she will be fought over by lots of swoon-worthy men, preferably knights who will ride to war to defend her honor. The quick-witted, good-hearted Guenevere is nervous about her engagement to King Arthur, whom she has never met. But Arthur too is scared stiff at the prospect of ruling a kingdom and meeting his bride. To make matters worse, Arthur’s longtime mentor, the magician Merlin, will soon be leaving the kingdom behind, which means Arthur will be flying solo for the first time in his reign.

As Arthur grows into his own, he develops a simple principle for ruling his kingdom: no borders, no wars, no jealousies — just the rule of law and chivalry governing his closest advisers. Despite this noble goal, clouds immediately begin to loom on the horizon, threatening to throw Arthur’s carefully cultivated dream of a “civilized kingdom” into disarray. The first problem is Lancelot, a French knight whose immaculate reputation makes him the envy of the court, from fair maidens and fellow knights alike. The other is Mordred, Arthur’s illegitimate son, who shows up in Act Two to try to scheme his way into stealing Arthur’s crown. There’s a lot of backstory and lore to the Arthurian myths that the musical simply doesn’t have time to fully explore — suffice it to say that these characters often cycle in and out of Arthurian stories as the plot dictates, always with the same motivations. Merlin will always try to teach Arthur unconventional lessons; Lancelot will always value himself a bit too highly; Mordred will always come up with elaborate plots to try to trap Arthur into an impossible bind. The order in which all this happens, or the likelihood of it happening all at once, isn’t really the point.

But “Camelot” is well-known for taking these fairly standard elements and weaving them into a morality tale about striving for a more perfect world. Its many adaptations have resonated in the aftermath of world wars and, most famously, in the shadow of JFK’s hopeful administration. As director Rose reminds us in the show’s production notes, the optimism of Camelot can still touch us with “a desire to see the world united,” even when our hopes don’t quite live up to our expectations.

Barter’s production does a marvelous job of bringing that sheen of glowing idealism to each scene. The entire cast sings wonderfully, and there’s not a weak link when it comes to bringing Loewe’s lovely score to life. There are a few standouts, however. Making her Barter debut, Samantha Bruce brings a crystalline voice and effortless warmth to Guenevere. Andrew Hampton Livingston’s Lancelot brings down the house in the character’s solo, “C’est Moi,” and perhaps the biggest laughs come from Mary Lucy Bivins’ take on the elderly King Pellinore.

“Camelot” requires the characters to grow over the course of the show; while they start out as lightly sketched, comic versions of themselves (the flirtatious Guenevere, the bumbling Arthur, the arrogant Lancelot), they evolve as they become disillusioned with their idyllic Camelot. They grow up, for better or worse, and that makes for some complex heartbreak in the final act. The problem for “Camelot” is mostly that it’s so concerned with showing Camelot’s idealism that it doesn’t dig deep enough into what makes Arthur’s kingdom fall apart. There’s so much pep that it can be jarring when we shift into darker tones, so it’s not always clear what aspects of our characters we’re supposed to take seriously.

Camelot has been notoriously difficult to adapt as the years have progressed, mainly because each revival brings a new round of tweaks to the script and score. Barter’s production mostly follows the original, with the only major alteration being live, thrilling fight choreography from resident actor Sean Maximo Campos (who also plays Merlin and Ser Lionel). But most of the songs that have been slashed from subsequent productions are still here ― “You May Take Me to the Fair,” “The Seven Deadly Virtues” and “Fie on Goodness!” Keeping those songs in contributes to the musical’s tonal issues, but they’re also beloved, genuinely great songs, and like the rest of the show, the audience can’t deny the infectious good humor the cast brings to each number.

But Barter’s version still manages to leave its audience with serious questions to contemplate about its characters. Is Arthur a naive daydreamer who has no idea how to put his hopes into practice? Or are men really doomed to fall back into barbarity, no matter how many Camelots we create? The psychology at the heart of the play is what keeps audiences coming back again and again, and Barter’s winsome take reminds us what it means to cheer for “happily ever after.”