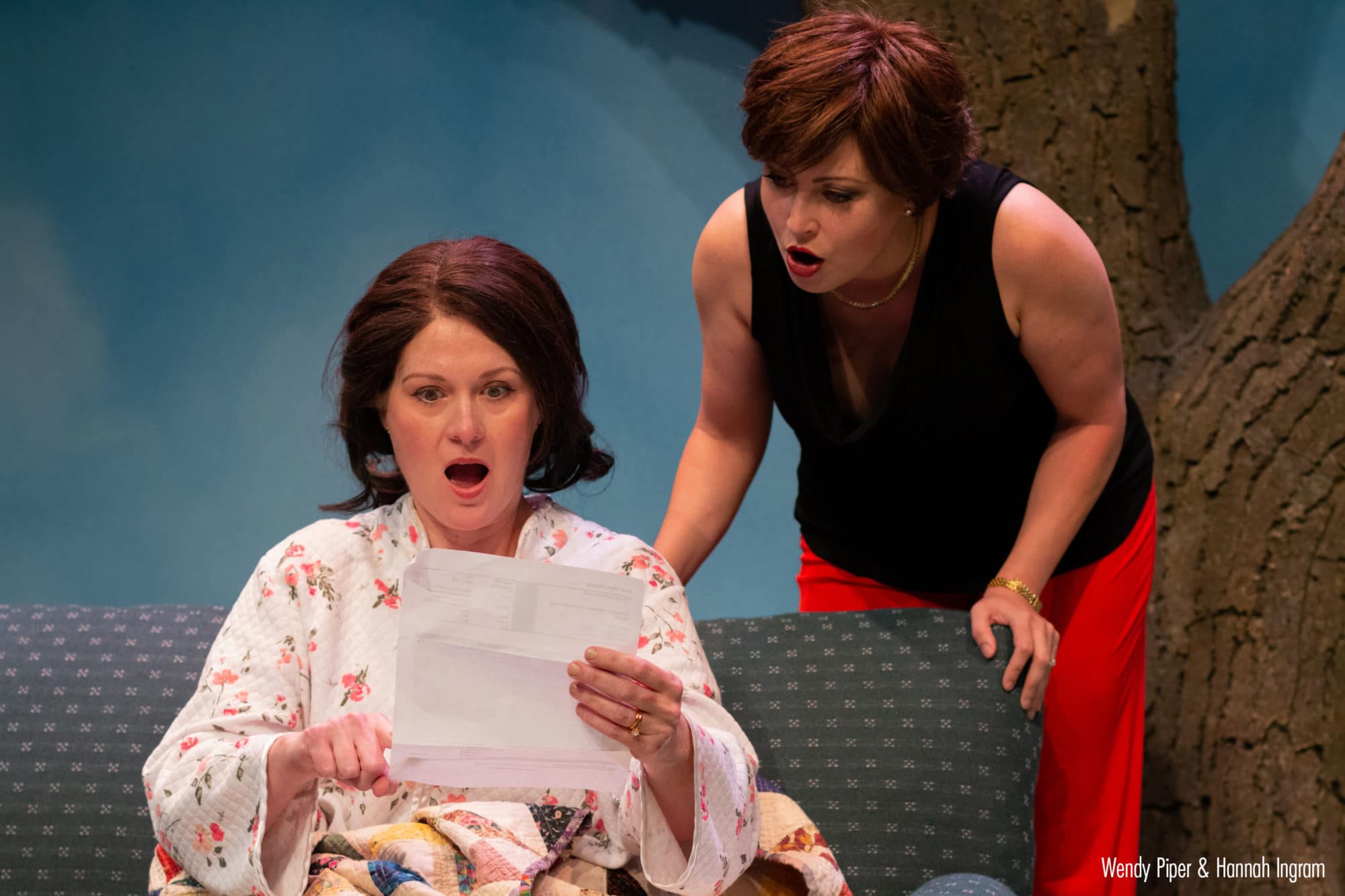 A cautionary tale has tremendous impact when the tale is actually true. With ordinary people as its characters, we learn that anyone can be drawn into a web of disastrous entanglements. Anyone can feel absolutely certain of their moral convictions and immunity to worldly enticements – until suddenly they discover they are not. The stray seed of chance temptation can fall through the crack in anyone’s sidewalk and turn into an ugly, overpowering weed. Such a tale is Stacy Isom Campbell’s The Loophole, now playing at Barter Theatre.

A loophole is a tricky phenomenon. Originally the word meant “arrowslit,” a narrow opening in a wall allowing an archer to shoot while protected from attack. Later it became known as a means of escape, an ambiguity in a law or system that enables a person to avoid playing by the rules. But utilizing this form of escape is fraught with potential for backfire, and protection is not always guaranteed.

Darlene and Charlene, gentle twin sisters and unassuming church ladies, fall prey to the lucrative lure of a loophole. What begins as an honest error in billing the Department of Defense for hardware supplies soon develops into a full-blown and profitable fraud. Succumbing to human frailty, the temptation to solve all their problems with ill-gained goods proves irresistible. But mere problem solving morphs into greed, a hungry monster that demands bigger and more frequent meals as it inevitably grows. The sisters continue to pass off doctored invoices, to the tune of over 20 million dollars.

From the headlines of national news media, Campbell has crafted a saga that immediately invokes both shock and empathy. Weaving a story rich with lyrical symbolism, these characters struggle with common human foibles. Darlene and husband, David, wrestle with heartache, blame, and guilt after the accidental death of their son Ben. Charlene faces the void of her loveless marriage with Bill, plus his imminent business collapse. In their effort to cope, grief and anxiety form an unlikely partnership with greed, which inevitably swallows them whole.

Under the direction of Barrett Guyton, the realistic tragedy of The Loophole unfolds in a gracefully executed theatrical manner. Scenes glide between past and present seamlessly, making the complex facets of the story clear. In the intimate space of Barter’s Smith Theatre we feel the entrapment of the characters within the dilemma of their own making.

A tight ensemble skillfully yields us these relatable characters while letting the story speak for itself. Wendy Piper (Darlene) and Hannah Ingram (Charlene) play the sisterly duo with an appropriate mix of innocence and subtle cunning. Nicholas Piper (David) guides us through the journey as a formidable narrator as well as the forlorn but naïve grieving father. Sean Maximo Campos (Bill) is suitably gullible, but later outraged at his wife’s criminal actions. Michael Poisson (Brother George) is steady and grounded as the wizened monk who helps David find his way, even if too late.

Derek Smith’s earthy but elegant set design provides fitting imagery for this story. A single large tree springs up from center stage surrounded by garden soil boxes. We are reminded of the nature of growth and nurturing, or the lack thereof. In the limbs of the tree is a cleverly disguised projection screen upon which images appear that help propel the storyline. Complemented with Matt Martin’s original music, a captivating effect is created that draws us into this compelling journey.

The perils of temptation are a universal. When hardship strikes and defenses are down, the chance that vulnerability will overpower resistance is a scary proposition we all face. Heeding a cautionary tale can help us avoid falling through a loophole with no chance of escape.